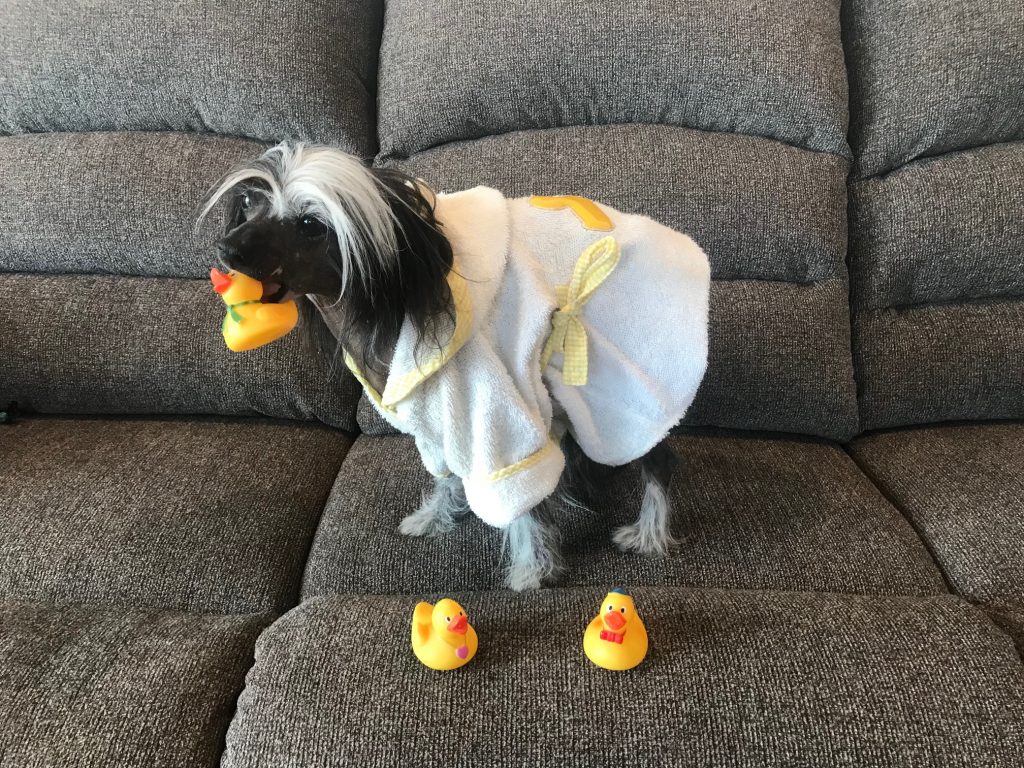 Many dogs love water, puddles, lakes, the ocean. That doesn’t mean they want to be bathed. Sadly, baths are a fact of every dog’s life or, at least, they should be.The most important piece of advice I can offer here is that you should not use physical force when it comes to bath time. Don’t allow your actions to be guided by the frustration you will undoubtedly feel when your dog resists your attempts to bathe him. Have you ever heard of fighting fire with fire? If you use physical force with your dog, he will learn to use it with you. Also, never, for the love of peanut butter, call your dog to do something that he perceives as negative. For example, he may attempt to camouflage himself under the dining room table when he sees you grab the dog towel. In that case, kindly go to over to him and gently extricate him from his make-do shelter. Don’t ambush him or yell at him; you’ll only make matters worse. Using some treats and kind words will go a long way in comforting him. No matter what you do, your dog will probably behave like one of King Henry the VIII’s wives and act as though you’re taking him to the guillotine, anytime you grab that dog towel. Dogs seem to know exactly when you’re going to bathe them. Much like an elephant before a tsunami, they can sense it.

If you’re bathing him outside with a hose, I recommend using a leash as well. This does not mean that you should restrain Butch and force the hose on him as he panics and tries to get away. Use desensitization techniques, wet him a little, then reward him and play with him. Do this a few times over the course of a few days before finally giving him a bath. Don’t go through the desensitizing steps too quickly. If he looks agitated, stop and redirect his attention to play. A little wetting of his coat each session will go a long way toward making him feel comfortable with the hose.

Some dogs, especially the more modest among them or small breeds, prefer to take their baths indoors in the bathtub. Of course, even the least modest will prefer an indoor bath if they happen to live in Minnesota and it’s winter. If your canine companion is too small to jump into the tub on his own, pick him up, put him in, and give him a treat. He might be too concerned to take it. No worries. Just reward him with praise and kind words, do not wet him yet. After praising him, take him out of the tub. Once out, offer him the treat again. That’s the first step. Next, gradually start wetting the dog a bit more during each desensitizing session, and after a few sessions, you can give him a full bath. Always give treats after the bath is over, and not just a single treat, either. He should receive a jackpot and lots of praise.

If your canine companion is larger and able to jump into the tub on his own, make use of the “kennel” command to tell him to get in. Again, don’t bathe him the first few times; desensitize him and move through the process slowly. It’s unlikely that he will ever look forward to his baths, but he will definitely look forward to the praise and treats he receives afterward.